Jellyfish, or the story of cause and effect

This summer there has been a huge plague of jellyfish all along the coast of Southern Spain. Thousands of these slimy creatures were infesting the water and covering the beaches, mainly small ones but also some with tentacles as long as 10 metres. Bad news for tourism! The big question was – where had they all come from? 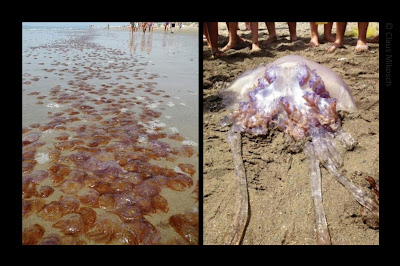 Here are the two most popular explanations I’ve heard: 1) it was the fault of global warming; 2) bad luck was blamed. Yet neither global warming nor bad luck are responsible for the sudden and unprecedented invasion. Higher water temperatures certainly don’t help, but the main reason for the dilemma is a different one – lacking competition! Take the natural predators of any species away and they will multiply without control. Just look at us humans! It’s like a cancer, an eco system out of balance.

The biggest enemies of the jellyfish are sea turtles and tuna. I don’t know about turtles in the Mediterranean, but I do know that over 90% of all tuna have disappeared from the sea in Southern Europe in recent years. Coincidence?
We’ve decided to consume all tuna and now there’s noone left to eat the jellyfish and keep the tourists happy. Bad weather and bad luck are blamed for our spoilt vacation, when really it’s our greedy and unsustainable way of living which makes swimming impossible. What goes around, comes around. Cause and effect. Simple.

A few days ago a friend of mine went out with some local fishermen to spend a night at sea. He left with excitement and returned depressed. Large quantities of fish were caught, but only the ones which had a high market value were kept. All the others were thrown back into the water, dead. Common practice, he was told. To make things worse, when my friend asked where to put the plastic rubbish from the food he had brought, well, guess which bin he was directed to? Yep, the big blue one right next to the boat.

So let’s get this straight: We take all the nice stuff from the sea to get cheap and tasty protein and we return dead fish and plastic, and then we complain about evil jellyfish invading the coast... Seriously, if I was Mother Nature I’d make those jellyfish walk so they’d invade the land too!

Here’s a question: Who is buying the fish?

I wonder… When will we finally learn that we can’t keep on blaming others for our problems? Not the weather, not the neighbour, not God and not even politicians and bankers. It’s us! All of our actions influence our daily reality. Every time we consume something, we decide what kind of world we want to live in. And considering that we have free choice, we therefore also carry the full responsibility for our decisions. As Nina Simone has said: “If I die and my soul be lost, nobody’s fault but mine!”

What world do you want to live in? With, or without jellyfish on the beach?

It’s our choice. Every day!