In search of silence

Have you ever experienced complete silence? A state of ‘zero-noise’: no distracting sounds, no disturbing thoughts and, most importantly, no ticking time. Total peace. Does it exist?

Five weeks ago I left my southern comfort zone and travelled to a small village north of Barcelona to do a Vipassana course – a 10-day silent retreat. Vipassana is a very old meditation technique from India. It’s the same technique that was used and taught by Siddharta Gautama, also known as the Buddha. Given that I am the author of The Little Buddha, I felt kind of obliged to give it a try.

Noise
The centre, Dhamma Neru, was a bit of a mixture between a rural yoga studio, a friendly monastery and an alternative prison. There were 60 participants, 30 men and 30 women, strictly segregated. Put simply, you were allowed to bring only one thing: your self! No books, no music, not even pen and paper. Phones had to be handed in at registration. No drugs, no talking, no physical contact – no nothing! All external stimuli were removed so that you could focus on what’s inside.
The timetable: Wake-up gong at 4am, meditation until 6.30am, breakfast, shower break, then more meditation til 11am, lunch, rest. 1pm back to meditating, once in a while a 5min break to stretch and walk in the garden, 5pm dinner (= 2 pieces of fruit and a tea). 6pm – guess what? – more meditation, at 7pm a lecture, followed by another session of quiet sitting and then at 9.30pm bedtime. Like this for 10 days. Did I mention that I don’t like rules and routine?

How did it go? At first I found everything BUT silence. For four days I had computer screens and email layouts running through my head, I just couldn’t switch them off! It’s actually quite scary how we get hooked on being constantly connected. There were a million thoughts and questions and doubts, a storm raging outside and the guy sleeping in the bunk bed underneath me was snoring so badly that my whole mattress was vibrating. But even worse than these noisy distractions was the pain of my legs: after two days I thought I might have to get them amputated once I’d finish this adventure. Before the course I was meditating once a week for 15 minutes, now I was sitting cross-legged for over 10 hours – each day! It was so painful that, to me, Buddha lost his loving kindness and turned into a nasty SM practitioner… There was a lot of tension and frustration, my mind was like a wild animal – it didn’t want to be tamed!

Change
The basic law in Vipassana is called ANICCA. It’s the law of impermanence – nothing ever stays the same, everything is changing constantly. And this is exactly what happened: slowly but surely, the pain went away. Then it came back, went again, came, went, and so on. The same thing happens with all other sensations and emotions, they come and go. During the 10 days you learn to observe this constant change and to look at it with an equanimous mind. And so equanimity, a word I didn’t even know before, became the most important mission of the course: to create neither desire nor aversion, to abstain from reacting. Whether it’s pain or ecstasy, it’s neither good nor bad. It just IS.

After five days, everything started to slow down. Walking, eating, breathing, thinking, it all happened more peacefully. Hurry was replaced with patience. Each hour and each moment became longer, and suddenly there was time for things we usually don’t have time for. Like washing clothes by hand or observing a small flower for minutes on end; following birds through the sky and watching clouds roll by; listening to the sound of silence; doing nothing. On the morning of day eight, even the clock in the bathroom stopped ticking. Past and future had become non-existent, eradicated by the strongest drug there is: the human mind.

Different experiences
Some of the timeless moments made me feel severely anxious, others put a happy smile on my face. The whole time in Dhamma Neru was a big challenge – physically, mentally and emotionally. It was painful and peaceful at once, beautiful, crazy, humble and intense.

Before starting the course I thought that the silence shouldn't be a problem, I was actually looking forward to shutting up for 10 days. I was mainly worried about having to sit for such a long time. And yes, the sitting proved to be rather painful, but with practice the pain lost its power and intensity. What I had totally underestimated though was the difficulty of not being able to speak. The silence itself wasn't even the problem, it was the fact that a bunch of people were sharing a relatively small space, all having intense experiences, and nobody could express them! During the second half of the course, on several occasions I could see how people were struggling to not lose the plot, me included. There was a moment when I thought I couldn’t handle it any more and I almost left. Then I remembered the words of a friend, ‘if you think you can’t continue, you still can go three times further’. So somehow, I stayed. And I am very glad that I did.

On day ten the silence was broken and we spent the day talking – a lot! I hadn’t laughed so much in a very long time, it was blissful and worth all the hardships of the previous nine days. The most beautiful part was that, even though none of us had ever talked to each other, immediately there was a feeling of familiarity. Having shared this very unusual experience in the same space, it didn’t take many words to make new friends.

Many people had similar stories to tell, but ultimately everyone had a very personal journey throughout the ten days. There was one guy who seemed pretty indifferent to the whole experience, saying it had been a bit painful at the beginning but otherwise nothing noteworthy happened. To contrast this, when I came into the garden after breakfast early on day nine, there was this crazy dude hanging horizontally in a tree, singing (illegally)... In between these two extremes, pretty much everything happened.

Now, not everything about the course was perfect. Personally I found some of the rules too rigid and there were a few people who I couldn’t relate to. But most things I really liked, or at least they made sense. I’d even say that the general setup is quite pure. I love the fact that the course has been kept free from any commercial interests – students are not charged anything! The administration staff, kitchen, cleaning and maintenance staff, even the teachers, they all work on a voluntary basis. Donations of money and/or time are welcome and encouraged, but there’s no obligation. Furthermore, Vipassana is a technique which is free of any mantra or ritual, and although it has its roots in Buddhism, it’s not limited to any religion. There’s no God to be worshipped, no Guru to be followed. It’s just you, your body and your mind.

Purification
Vipassana literally means ‘to see the things the way they really are’. It’s an ‘Art of Living’, with the aim of reducing suffering and increasing happiness. Less Ego, more Love. Getting rid of judgement and expectations and accepting life as it is. Sounds great, doesn't it? As so often, it is easier said than done...

It’s important to remember that doing a Vipassana course is not a pleasant trip on a cruise liner. While I think that most people would greatly benefit from it, I certainly wouldn’t recommend it to everyone. It requires courage to show up and a willingness to work very hard on yourself. Like a sailor searching for a peaceful island, you’re bound to come across heavy storms, and not every storm is fun. Anger, fear, grief, greed, hatred – we all carry ugly stuff inside that wants to come out. As Mr Goenka, the principal teacher of Vipassana, says: ‘You undergo deep mental surgery’. That’s pretty accurate.

The result of the surgery? A purified mind. Well, obviously ten days won’t turn you into a saint, but you definitely get a proper mental spring cleansing. Healing some wounds, getting rid of old conditioning that serves absolutely no purpose, and of course: feeling more at peace! Plus, you’re being given a great tool for daily life – you just have to use it.

The verdict
Since I got back from the course, three weeks have passed. I've managed to keep meditating every morning for an hour, and sometimes a little bit in the afternoon too. What has changed?
My mind is still a wild animal, but occasionally it smiles now ;-). I tend to worry less – whether it’s about money, little pains or unfulfilled dreams. I seem to be observing more and reacting less. There’s more compassion and when I get angry the anger disappears relatively quickly. I’m living and thinking more healthily, although there’s still lots of room for improvement. But hey, small steps are steps too.

Finally: have I found silence? Some, yes. But I think the problem of ‘finding’ lies with ‘searching’. Because as long as you search, there’s effort, and if there’s effort, there’s struggle. Struggle causes tension, and tension prevents you from being truly receptive. The problem: if you’re not open to receive, you won’t find. So, the bottom line is this: Silence, like all other real treasures, cannot be found. It comes to you – once you let go…

Bhavatu sabba mangalam – May all beings be happy! 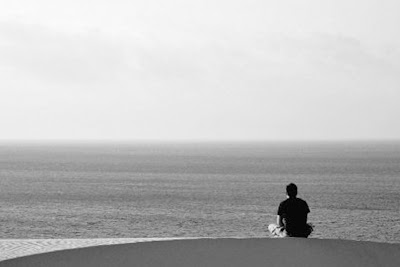 For those who are intrigued: