Last Friday the tragedy of Paris happened. One day earlier, a similar act of senseless violence occurred in Beirut. Thousands if not millions of people have died in other attacks in the last years, all around the globe. And, unless you are drowning in some kind of utopian dream, many more casualties will follow soon. So much unnecessary death, so much suffering – at times, life sucks!

May those who already died rest in peace. But what about us, the ones who are still alive? We can't rest, because we're not at peace. We're left with a feeling of helpless impotence and rising fear, and we keep asking ourselves: now what?

Blaming others – terrorists, politicians, Gods – doesn't really help, for it will only lead to more conflict, hate and bloodshed. So instead of playing a ping pong game with guilt and blame, here are a few things we could try to do.

If an alien came to planet Earth and listened to the news for a single day, he or she (or it?) would very quickly get the impression that this place is hell. War, murder, terror, racism, speciesism, egotism – bad news, 24/7.

Yes, it's important to not ignore what's going on, but we all know by now that a lot of shit is happening in the world. Reminders are great, but all the time? Constantly? There's a lot of good stuff happening too, it's just for some reason the news people don't want to talk about it. Fine, it's their choice, everyone can talk about what they want. However, WE can choose to not listen to them anymore. Because why would you want to listen to someone who's making you feel scared and miserable ALL THE TIME?

Not long ago a friend told me that, for him, 'the most powerful medicines are hope and forgiveness'. I think there's a lot of truth in these words. The only problem I have with hope is that, while it can be certainly very healing and comforting, it's a rather passive thing to do. 'I hope the world will be a better place soon...' – nice, but is it going to get better by itself?

Forgiveness on the other hand is full of action. 'I forgive you', that's me doing something very actively. And one thing is for sure: with so much violence and injustice going on, the world is in desperate need of a lot of forgiveness!

Even a suicide bomber needs to be forgiven because no child was born that way. 'Natural born killer' is a phrase which might make good movie titles but in real life I don't think that natural born killers exit. No one is born evil, people become that way because they've been misguided by false friends, false beliefs and/or a sick society.

Of course this is easy for me to say – if my daughter had been hurt or killed by some terrorist, I'd probably struggle to forgive. But then, what else can be done? What do we gain if we continue to hate?

By forgiving those who have done wrong, whoever they are and whatever they've done, we get a chance to heal our wounds, to let go of what was and to move on. To make it better.

Asking yourself: Are you 100% peaceful?

Talking about change and the problems in the world, another friend of mine recently said that, 'if we've created an aggressive world, then only because we are aggressive beings'.

You might say now that of course you'd never go and kill innocent people in a concert hall. Well, I hope so! But aggression has many faces – you don't have to be a mass murderer to be aggressive.
Perhaps you're even convinced that you're not aggressive at all, ever! But is this really the truth?

I think it's safe to say that there are very few people alive today who are totally peaceful. Most of us have feelings of anger, we have thoughts of hatred and revenge and we might even do violent things (for example eating meat is, ultimately, an act of violence; even calling someone an arsehole is).

No, we are no saints and it's okay that we're not. But it's really important to acknowledge the violence within, no matter how big or small it is. Because only if we honestly acknowledge this, only then are we able to change.

Peace can't be created if we merely pretend to be peaceful. Only if there are more and more people becoming truly peaceful, only then the whole world will become more peaceful too. 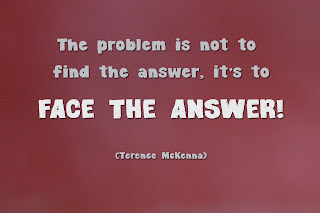