Parents – you gotta love them! Because without them, you wouldn't be here. But apart from this loving gratitude for ones creation, how comes I don't know a single person who has a sane and harmonious relationship with their parents? It always seems to be a struggle, often bordering on sheer madness and sometimes even going beyond that. Why can't it just be nice?

Recently a friend summed up two days with her mum and dad like this: “If Buddha had had my parents, he wouldn't have succeeded with enlightenment.” It's a funny reflection, and a very sad one. Being a dad myself, I really hope that my daughter will never have to say something like this about me. It doesn't always have to be super easy, the relationship between child and parent, but surely it's not meant to be as complicated and depressing as it often is. Not such an everlasting drama.

There's a great quote that I read somewhere: “If you think you're enlightened, go and spend a week with your parents.” Amen to that!

I wonder what would have happened if Buddha had not left his parents in the royal palace? Perhaps he would have become an angry ruler, letting his frustrations out on his people. A vicious tyrant instead of a peaceful saint. Who knows...

Sometimes you come to crossroads which determine your whole life. Like moving away from your parents, getting married or quitting a job. When he was 18 years old, Adolf Hitler applied to an art academy in Vienna. He was a passionate painter and dreamt of pursuing a career in the arts. His application was rejected. He stayed put and tried again one year later but again without success. The rest is history. But imagine he would have been accepted in the academy? Instead of a ruthless dictator he might have become a new Picasso. Who knows...

I deeply believe that no one is born evil. It's life that forms us and sometimes life is not very kind. Or at least it seems that way because life itself is neither kind nor unkind. It just is. And it's each one of us who chooses to learn and thrive, or to ignore the lessons and give up. For some it's harder, for some easier – but everyone chooses.

With regards to parents: They also have had parents and they too have to cope with all the challenges of life, with all the ups and downs and with the big uncertainty that lies ahead. Sometimes it helps to remember this. Not that it justifies every madness but it helps to understand and through understanding you end up feeling more sorry than angry. Not perfect, I know, but pity is preferable to anger – because pity can lead to forgiving and love, while anger only makes everything worse. 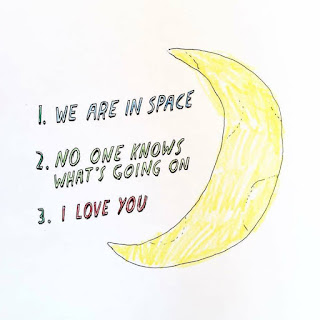