Ultimately, to me religions are like clubs where people with similar interests and beliefs come together. Like a sport club, or a science group, or a women circle. People sharing passions and history. And it feels good to share. To not feel so alone in this lonely life.

The problem with religion is that it's too strongly linked with faith. Faith provides comfort and hope and, most importantly, it soothes the fear of the biggest unknown there is, death. Take this away, or threaten to take this away with criticism, and people react as if their survival was in danger.

However, all the wars fought over faith and all the ongoing religious conflicts are completely unnecessary because your faith is yours. No one could ever take it away from you. It's a direct, vertical connection between you and that entity called God. Religion, on the other hand, is a horizontal connection between people. 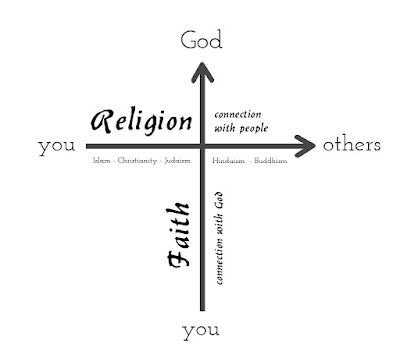 Unfortunately, in our world, past and present, there's always been far too much concern with religion and far too little focus on faith. Maybe the reason for this is because the cultivation of faith is a road of great solitude. Nobody else can walk your walk, no one can tell you what's right or what's wrong. It's just you and the big cosmos of possibilities. And unlike religion, where you can blindly follow others, faith requires you to make choices by following your very own heart.

At the end of the day it doesn't matter what you call your God – Lord, Allah, Krishna, Nature or Love. And even if you choose Nothingness as your God, that's fine too. I do think though that death is less scary and life is more meaningful if you believe in something more than mere emptiness. When there's a feeling that you're part of something bigger. Something sacred. Something that helps you to trust.

The moment you die, religion won't help you. On your journey to the other side you won't be accompanied by neither friends nor priests, and you won't be able to take any holy books either. It will be just you. You and whatever you believe in.