We were sitting on the beach, resting after a game of frisbee. My 15-year old daughter let the sand run through her fingers, her breathing was calm. “The next crisis is coming”, she said and looked up to the blue horizon. No sign of pessimism. No drama, no fear, no holding on. Her beautiful brown eyes filled with nothing but realism.

The last few months I've been following very closely what's happening in our beloved financial system. The last time I've done this was in 2009, just AFTER the economic crash of 2008. This time I want to get informed BEFORE the crash.

I'm sitting on the train while writing these lines and have just finished flicking through the Sunday paper. Shares and bonds continue to be regarded as safe investments, the real estate market is booming. “10 years after the burst of the housing bubble new records are made again.” Good times for everyone who's happy to get into debt. The question is: How long will it last?

The experts I read and watch – like Chris Martenson, Mike Maloney (who gave talks in 2005 warning about the housing bubble, three years before it burst) and others – they all agree on two things. 1) It's very difficult to predict WHEN the next financial crash will hit us, and 2) it is absolutely certain that it WILL hit us. Some say possibly this year, others in two or three years. Either way, it won't be very long. Mike Maloney calls it the 'Everything bubble' – stocks, bonds and real estate, already now they're all hopelessly inflated. Never before have so many people and countries been in so much debt and still everything is done so that the spending party can go on. In an apparent attempt to stabilize the system, the central banks keep creating money out of thin air and pump billions of dollars into the markets. A bit like trying to put out a burning house with buckets of petrol.

There's more to look forward to, like the retirement of the Baby Boomers which might trigger the collapse of the pension systems, or the millions of jobs that will be killed by digitalization and automation within the next decade, or the environmental armageddon unfolding on planet Earth. But for now let's stay with the smouldering debt fire.

If a massive financial crisis is indeed inevitable, as many confess and logic suggests, well, what to do? In the long-term a new economic system will bring more joy and justice to the world but the short-term ride could well be a bumpy one. Here are a few things that might make the transition easier:

What remains is the question why my daughter 'knows' that a crisis is coming. Well, luckily she has a History teacher who seems reasonably switched on. And it is history that clearly shows that all empires have ended, that greedy growth can't last forever. No rocket science needed. It's just the way it is.

The dark clouds are getting darker. If you look closely, you can see the storm already raging. It will bring thunder and lightning and many will get soaked in cold rain. But then, afterwards, everything will be clean and calm again. At least for a little while... 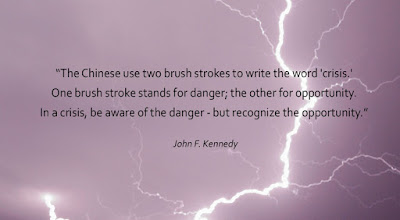