Thank God they are fighting again in the middle East! It’s been ages since I’ve seen bombs and blood on the news. Don’t you agree that there’s nothing better than watching a few blown off legs and dying children while having dinner?

Edwin Starr said it already a long time ago: “War – what is it good for? Absolutely nothing!” So why is it still happening? Apart from ruthless power games being played, there are two strong emotions that trigger these fierce battles: fear and hate. One party feels threatened and attacks, while the other calls for revenge. And on it goes...

Considering that the events in the macrocosmos are just a reflection of the microcosmos, we have to recognize that our daily life is filled with constant fighting too. Perhaps less bloody than in Gaza, but equally hateful. Businessmen, neighbours and parents are at war with each other, relentlessly. Nobody wants to give up, everybody wants to win. But winning what?

Sometimes it’s important to fight, no doubt about that. But most times wars between people and countries are totally unnecassary. The problem is that somebody gets hurt and wants to hurt back – yet hurting back never solves a problem, it only increases suffering. I have a sticker in my room which sums it up quite well: “Bombing for peace is like fucking for virginity!”

Here’s a common example of microcosmic war: A friend has told me recently that when walking through town and bumping into her Ex she’s getting nasty looks or, if lucky, is ignored. Even years after the relationship ended, hate is still carried around and there’s no sign of healing. Quite frankly, this is pathetic! And I think I am qualified to say this as I am best friends with my Ex (who dumped me) and today I even live under the same roof with her parents. In fact, I am on good terms with all of my ex-girlfriends. Why shouldn’t I be?

We all fuck up at times and do things wrong. But what point is there in hating ourselves or others for something that has happened in the past? Seriously – what’s wrong with forgiving?

I think the world needs profound healing, desperately! And this can only happen if we start to let go of what was, learn the lesson and move on. Hatred needs to be replaced with compassion. Otherwise wars will continue.

Now call me a hippie if you want. Even though that makes you a cold-hearted cunt, I shall forgive you ;-)

A CALL FROM THE UNKNOWN – the new book by Claus Mikosch, available as a free pdf download. Get it now and if you like it, please share it!

“Honest, moving, scary: I felt really tense and afraid during the hellish bits and moved to tears during the beautiful bits. I don’t know if I’d have the courage to take ayahuasca, but I do know that I have thought, felt and wondered about all the emotions you experienced and come to some similar conclusions myself. Thanks for a fascinating read!” (Sanchia H-S) 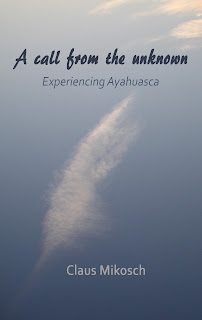