Remember happiness is a way of travel, not a destination. (Roy Goodman)

Blablabla... Sometimes I hate all these stupid quotes! They can sound so real and promising when you read them but reality is often a totally different story.

November in Cologne, Germany. I want to visit a friend in Barcelona and am checking out my travel options. Number 1: taking a two hour flight with a crappy Irish airline – cheap, but I will probably get annoyed about being treated like shit and giving money to a company whose business model I don't agree with. Number 2: jumping on a train and spending much more cash and especially more time than I would if I was flying. Option number 3: hitch-hiking. But in winter? Em, no thanks.
To change the habit I decide on taking the train. Seems like a good idea – in times of climate change and with the fast-paced life all around us it's nice to slow down a bit and use a slightly more sustainable form of transport.

At 4 o'clock on a Monday afternoon I leave home and head for the station. It's cold and wet, my back is hurting and I am tired – the perfect conditions to embark on a 16-hour long trip! Desperately I'm trying to remember why I didn't buy a plane ticket...
The first part of the journey takes me with up to 300km/h via Brussels to Paris. Pretty straight forward. However, what I'm not looking forward to is the fact that I have to change stations in the French capital. Good timing too – I'm set to arrive for the evening rush hour which means a hopelessly overcrowded Metro is waiting for me. And there's potential for even more stress: All that it takes is that my train gets in late and I'd miss my connection in the other station. 'Stay positive', I try to convince myself.
To my surprise the positive thinking works for once: the train arrives on time at Gare du nord and the Metro is pleasantly empty. In my wagon there's just me, two handfuls of other passengers and a colourful Dude singing a folky version of 'Don't worry be happy'. Nice!

Thirty minutes later I'm in Gare d'Austerlitz, with over an hour to spare. I walk around the station which is again much quieter than I've anticipated. Who said travelling in big cities has to be stressful? After indulging in a fresh croissant I decide to have a little walk outside. Leaving the entrance hall I cross the road and find myself right on the banks of the Seine. It's 9.15pm, full moon has just risen and the river is flowing by peacefully in front of my eyes. I call my sister and report happily, “I'm in Paris!”
Soon after I go back into the station building and make my way towards the platform where I encounter the next surprise: a piano! Yes, that's right – next to where my train is waiting there's a piano and a young guy is playing classical music. On top of the piano a sign reads: “This piano is for everyone – please use it!” Wow... In most places across Europe music in public is increasingly getting banned; here it's being promoted – instead of impatient moods, art is shared! 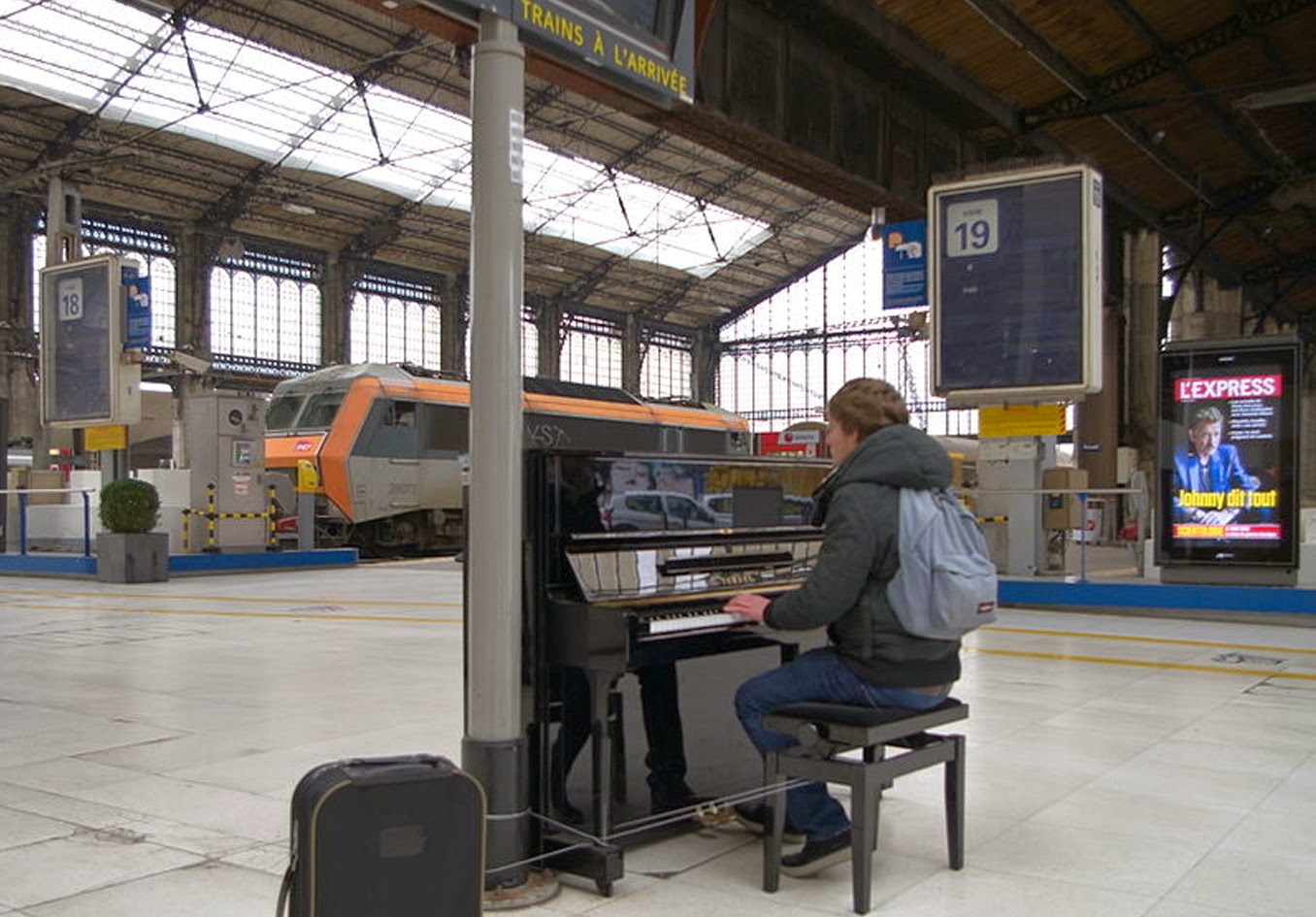 At 10pm I get on the train, feeling uplifted by the brief yet beautiful experience in the city of love. I squeeze through the very narrow corridor and am wondering how often it happens that some overweight person gets stuck in the aisle. Maybe they don't want fat people to take trains...? Anyway, I head for my cabin where I find my travel companions for the night: a Japanese traveller who doesn't say a single word; a really nice guy from Ecuador, a musician and a writer who has come to Europe to find inspiration for his first novel; and Miguel from Argentina who, as it turns out, is the ex-guitarist of The Gypsy Kings. While Mr Japan keeps hiding on his bottom bed the three of us spend several hours making music and exchanging philosophies about life. Train travelling at its best!

Arriving in Barcelona the next morning I'm feeling melancholic because my journey has come to an end already. Instead of an ordeal it has turned into a wonderfully enriching experience. And you know what? I doubt that a fast plane trip would have provided similar pleasure. It almost seems that you have to travel slowly to really get something joyful out of it, to allow for special things to simply happen.

I guess Mr Goodman was right after all: Who cares about the destination when all the fun is happening along the way?