Just fucking do it

Have you ever rode a bicycle with the seat being far too low? Not nice, right? For the last six weeks I've done exactly that. Why? Because every time I got the bike out and remembered that I need to change the seat, I was too lazy to go up and get the tools. When I finally got round to do it I went for a ride afterwards and couldn't believe how much I had tortured myself over the last weeks. I mean, how stupid can you be? Suffering, voluntarily!

Don't we just love postponing our tasks and dreams? And the same goes for our efforts of being responsible human beings: For years I've known that banks invest our money in profitable weapon companies. I speak out against war but my very own money helps to fund that war – again, clever me! In Spain I had already changed to a more ethical bank a while ago but in Germany it wasn't until last month that I did the same. Now all my money (not much, but still) is used to support organic farms, renewable energy projects and social institutions. Question is: What on earth took me so long to make that change?

Sometimes our love affair with procrastination can also lead to dramatic situations that are beyond fixing. I was really moved by a post from a friend which I read recently. He had been wanting to contact a good friend but he hesitated during several days. Too long as it turned out – his friend committed suicide. Whether he would have been able to help him or not, it doesn't matter. The possibility of making that call is now dead.

“The trouble is, you think you have time.” (Buddha)

You have calls to make? Make them. You have dreams to follow, ideas to share, help to offer? Time is ticking, so live your dreams, spread your ideas and offer that helping hand! If you don't like wars change to an ethical bank and if your God damn bicycle seat is too low, don't be an idiot like me.

Whatever it is you want to do – now is the time! 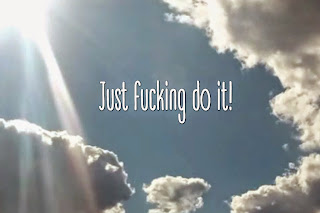