This month I was going to write about why I think that at least 80% of all politicians who are over 60 years old should resign. However, a few days ago I had an interesting little experience which I'd like to share and so the bashing of the politicians has to wait till next month.

I was waiting at the bus stop, sitting next to a tree and having a moment of peace. At some point a car approached and parked about 20 meters away from me. A guy in a bus driver uniform stepped out and while sipping at a can of coke he went over to another parked car and started talking to a colleague. While I was staring at them, daydreaming about something else, I saw that the first guy finished the coke and then, totally unexpected, he threw the empty can into the bush next to him. At once my daydream stopped.

I whistle, he turns round and smiles at me.
“Do you think this is normal?”, I wonder, not hiding my indignation.
“What?”
“Throwing your rubbish into the bush!”
He seems surprised and smiles again.
“I'm serious”, I say with a louder voice, “what if everybody did that?”
“As if you never throw anything away”, he replies, a little louder still.
“Yes, but into the bin and not just...”
He snaps.
“Listen, I got up at 5.30 this morning and worked the last 7 hours. I don't care what you think and I don't give a fuck where I throw this can!”
We start to shout at each other, both angry that someone has destroyed our peaceful moment. After a minute of silly insults the battle ceases and we proceed to ignore each other. Shortly after I get up and head to the bus. With a shaking head I'm cursing the blatant ignorance I have just come across.

While the bus rolled onto the motorway I kept thinking about this idiot and how there are far too many people like him in this world. Anger and frustration took hold of me and I felt my whole body being poisoned with negative energy. And then I suddenly realized how pointless this confrontation had been. I was angry and sooner or later I would pass this anger on to someone else. Same with the other guy, probably he went home and let his agitation out on his wife or his kids. There was only one winner and that was anger itself.

Sitting by the window and watching the passing fields and mountains I started to think about a book I recently read, about non-violent communication. Like many other books it contains all sorts of wonderful advice for a better and healthier co-existence but all this advice is of course totally useless unless it is applied. So, what if I had used non-violent communication in this situation?Expressing my own feelings and needs AND listening to the other person with empathy. Could have been something like this:

“Look, I understand that you are tired after a long day's work and that you don't want to be dealing with some random guy who tells you what to do with your rubbish.”
My voice is calm and the bus driver doesn't know how to react.
“I'm sorry for getting on your nerves”, I continue. “But I would appreciate it if you could see my perspective too. I was sitting here peacefully, surrounded by a little bit of beautiful nature, and then you appear and throw your empty coke can into my little paradise. I'm sure you meant no harm but I'm also sure that you'd agree that nature is nicer without rubbish.”

Maybe he would have punched me right in the face. Or maybe he would have nodded in agreement and we both would have left the scene with a smile. Who knows... There's only one way to find out and that's by trying it out in the next situation of conflict. 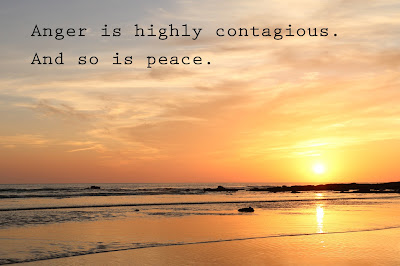