In Germany the ultra right-wing AfD party received almost 13% of votes in last month's election. In the USA the elected president goes crazy because some football players don't stand up for the national anthem. In Spain the central government and half the country are battling with Catalonia over two flags.

As much as I try to relate to this romantic idea of country possession, with every passing day I find it more and more absurd. Call me a retarded hippie or whatever you like but I just don't get it. Why do you care so much about a country? Why does it matter? It's just a line on a map, isn't it? Useful for administrative purposes and Olympic games, but not to fight over and die for.

It might help to remember where we are...drifting on a tiny rock in a universe that is so huge it blows your mind just trying to imagine it. And this is not even the only universe! In other words, what's the point of defending a country when the whole planet is our true home? The only home we got.

America first? Fuck that! We have to put the Earth first, now and always!

You wanna be proud of something? Reduce, reuse and recycle. Eat organic food. Share your harvest. Clean the beach. Plant some trees. Smile, laugh, cry and learn and try to do as little harm as possible. Open your heart and become an outrageously courageous soldier of nature!

The ground we all walk on doesn't belong to anyone. We're just lucky to be here and the only thing that makes sense is to look after our host as good as we can, to treat her gently and respectfully and to not wreck the whole place. Others might want to enjoy this little paradise too. 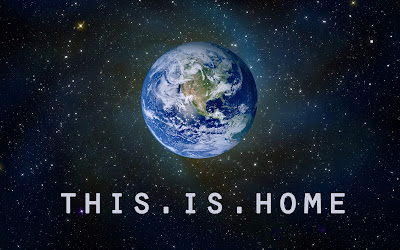