How many artists do you know who make a living from what they are doing? Not many, right? I am one of the lucky ones. And although I know a lot of other amazing and dedicated artists, only very few get by without one or two other jobs. Isn't that strange? We are surrounded by so much art, by words and songs and photos, we consume more films and stories than ever before – and yet, financially speaking, it still sucks to be an artist.

One reason for this is that we've gotten used to the weird idea that art is and should be available for free. YouTube, Spotify, Facebook – why would you pay for a new song when there are at least three ways to listen to it for free? Same with films, articles and blogs – same with pretty much anything that can be distributed online.
In a way it's great that it's like this – even people with very low budgets can enjoy the finest and most diverse selection of art that has ever existed. But what will happen to our culturally-rich world if the average person continues to spend more money at Burger King and Primark than in record and book shops?

Another reason why so many artists are poor is that the profits are incredibly badly distributed. It's the same as anywhere else in the economic world: A few take most pieces of the cake and leave the many to fight over whatever is left. Netflix, Spotify and some big publishing houses get rich, while the vast majority of independent artists struggle to survive. And even those who 'make it', well, ask a musician how much he gets for the thousands of clicks his songs get on Spotify. Ask a filmmaker whether films on YouTube cover her expenses of time and money. Or ask me how much I earn per book. I'll tell you: per sold copy, I get between 16 and 84 cents. Minus taxes, social security, traveling costs, work equipment, etc. Means you gotta sell a lot of books to make ends meet... Here's a few more numbers: 90% of all published books are sold between 1000 and 5000 times. If you wrote a book every 3-4 weeks, it would be okay. But how many people do you know who write 12 books per year?

Most artists do what they do because they want to. For me it's the same: I write blogs and books because I enjoy it and because it helps me deal with this bizarre world; I make films because it's great fun and because I learn a lot; and I make the mix tapes because I love to listen to them myself. If everyone around me died and I were the last person on Earth, I'd probably write a book about it, or I'd do a special doom mix called The empty world.

However, artists also pay rent. Most don't own three villas.

Getting to the point of this little rant: Recently I’ve been thinking about how I could generate some additional income with my creative activities, and a very simple answer came to mind: to ask for it! Because that's something else many artists have in common: we are shit at asking for money. A defect that seems to come with the job. It was time to fix it, so:

I made a website (you're already on it) where all my creative work is displayed in one place – the monthly blog, books, films and mix tapes. If you enjoy some of the stuff I do, and feel like supporting an independent artist financially – helping to pay for paper, some new songs, a better microphone for the next film or, if you're feeling extra generous, a two week holiday in Jamaica – there's a donation button at the bottom of the homepage. Anything is appreciated. Thank you! 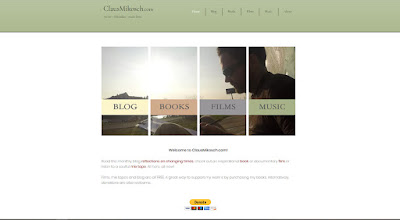 What else? In 2019 two (possibly even three) of my books will be published in English, plus a new one in German; there will be twelve new blog entries with my reflections on changing times, and at least a handful of new mixes to sweeten your days. A new full-feature documentary is planned for 2020. Not sure where to fit in that Jamaica vacation, but I'll swing it one way or the other.

PS: My 15-year-old daughter told me she discovered Bob Marley last week. I bet she'd love to join me on that trip...