I love Amazon. No matter what I want to buy – books, music, kitchen utensils, candles, toys, pens, electronic gadgets – finally there is one single place that has it all. Recently a friend of mine has even bought all the furniture for her new flat with just a few clicks. There's no need to waste time in countless different stores, it's not even necessary to leave the comfortable sofa. Delivery is fast, prices are competitive and thousands of reviews guide you to the best items. Furthermore, every time I had a problem – wrong size, a malfunctioning product or simply too much money spent – it was solved almost immediately and without any hassle. Even in the offline world it's hard to find equivalent customer service.

For people like me, who actually don't like going shopping, Amazon seems like paradise. A couple of months ago I was in a big shopping centre because I needed some things I couldn't get in any small local shops. At some point I ended up trying on some shoes. I wasn't totally convinced though and was about to leave when the shop assistant said in a persistent tone, 'just get them, you can always return them when you come back the next time.' My reply: 'But I don't want to come back!' To me, shopping malls are horrible and utterly depressing places, full of greedy, stressed and unhappy faces. Why would I want to come back? Amazon's website seems blissful in comparison.

However, I also hate Amazon. It's a perfect reflection of a world that puts consumerism above anything else. Buying has become the new praying and money the new God. And not surprisingly, without prayers and a loving God, ethical behaviour isn't the top priority (not that it ever was, but it seems to be getting worse). Amazon exploits producers, sellers and even its own staff; buyers are trapped into a hypnotizing shopping frenzy and so every day thousands of people end up buying more stuff they don't need, which leads to more feelings of emptiness and less happiness. Millions, if not billions of trees are cut down to produce all the packaging, most of which is destined to land in the bin and litter the land. A while ago I ordered seven items and received four separate, unnecessarily huge packets – logistically it might make sense, but environmentally it's an absolute nightmare.

Many other online giants do the same, but since Amazon is the mighty king of all giants, it's also the most visible one. And I think in a world which continues to be driven by profit and power, it's save to say that, in order to be the biggest, usually you have to be the most ruthless too. Empires are rarely built peacefully.

Amazon is cold. Digital. Impersonal. Many years ago I used to work in a record shop – it wasn't only a shop, but also a meeting point, a place to find both art and friends. It was a happy place because everyone who worked there was passionate about music and loved to be there. Customers often came with a sunken face and left with a smile. A melting pot of music and roaming souls, providing a meaningful and often joyous shopping experience. Online on Amazon I get the music too, but the vital second ingredient is missing: the human connection.

Long story short: When I saw the pile of Amazon packages that I had ordered just before Christmas, I felt slightly ashamed. It just got out of hand and needs to be changed. My first impulse was to stop buying online altogether. But is this realistic if you don't live in a big city where small, specialist shops still exist? And is it necessary to boycott Amazon 100%? Let's face it: Sometimes it's difficult to resist the temptation of convenience.

I asked myself a question: How much Amazon in the world would I be willing to tolerate? In the US, almost half of all online sales are already done on this one platform. That's 5% of all retail sales, on- and offline. Is that acceptable for me? Would I accept more? 10%? 30? Even half of all sales?

Personally, I think it should be less than it is now. Or at least it shouldn't grow more, otherwise one day we won't have a choice any more. For now, there are still plenty of other, more ethical and independent online shops out there. Also, I don't really fancy a world without unique small shops, where real people stand behind the counter. Shops with a shining soul! So whenever possible, these should be my priority.

Maybe it's this word SHOULD that will kill us. Because should equals lack of action. I should eat less meat, I should buy only organic food, I should fly less often, I should make it all better. I should slow down, I should live in the Now.

How can I get rid of SHOULD?

Usually I use SHOULD when I talk about something which, to me, at the present moment, seems out of reach. A utopian fairy tale goal, unrealistic and too much hard work. Others might be able to do it, but not me. I'm too weak, too lazy and also too small. What difference can I make anyway?

A beautiful and comfortable excuse. The problem is, excuses don't change anything.

So why not breaking up the utopian goal into smaller pieces? If I'm heading towards hell but want to get to heaven, I can't simply beam myself there. I have to turn around and start walking towards it. Once I've changed the direction, each step will bring me closer to where I want to be.

Regarding my Amazon dilemma, it means to put the focus not on eliminating but on reducing. First step: Whenever I don't get something in a local shop and need to go online, I will check if there's a good alternative to Amazon. If there is, I go there. If not, and only then, Amazon is acceptable. In one year from now I will tell you how it went.

In the meantime, feel inspired for your own changes by José, the sailor of ANICCA: 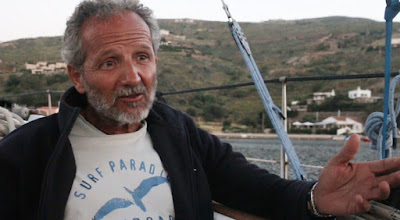