On a Monday morning in September, 19 years ago, I received a package from a friend. I opened it and took out a big pile of copied pages. It was a book, but no ordinary one – it was an illegal book, supposedly talking about what's really going on in the world. About the Rothschild family and other elites, freemasons, invented diseases and wars and hidden symbols. Intrigued, I started reading that same afternoon and didn't stop until I finished the last page the following morning. It was a fascinating and also unsettling read, leaving me wondering how much of it might actually be true. At 9am, Tuesday morning, I went to my neighbour‘s for a grounding tea and conversation. His TV was running and as soon as I sat down, the news came on. My eyes widened at once – the second plane was just crashing into the South Tower of the WTC in New York City. It was 9/11 and I had just spent the whole night reading a summary of all the conspiracies in the world. My heart raced – was this really a terrorist attack?

Since then, I've read many more books on conspiracies, I watched films like Zeitgeist and had countless conversations about 9/11, chemtrails, media manipulation and evil Bilderberg meetings. At some point, however, I stopped. I got really tired of all the wild theories, mainly because they don't inspire positive action. But this doesn't mean that I think it's all made up – there are very powerful people out there who get hooked on power and want more and more of it. Human nature I guess. I totally believe they misuse their power to create false stories, seeing the world as a big board game and are willing to do barbaric things just to control most of the game. You don't even need to read illegal books to come to this conclusion, it's enough to look at the work of lobbyists. Why do we still use coal to generate electricity, and petrol cars to move around, when clean and sustainable alternatives have long been available? Makes no sense whatsoever. Hence, I don't feel like a conspiracy theorist when I say that, yes, we are being mislead and fooled.

This year, 2020, conspiracy theories have been taken to another level though. Bill Gates is blamed for a virus and at the same time most who blame him think the virus doesn't even exist; Polititians are blamed for killing children and drinking their blood, and only Trump, Q and very high walls can save us from the worst people of all, the refugees. Climate change is a hoax invented by green parties who want to turn the world into an eco-dictatorship and the images of overcrowded hospitals were all shot in a Hollywood studio – it's a plandemic, of course!

Everyone is free to believe whatever they want. But here's a question: What good has blaming ever done? It seems so easy – if it's THEIR fault, THEY need to be eliminated and then the whole world will be a peaceful paradise. But in reality it's not easy at all.

It's so easy to blame others – and so difficult to accept responsibilty and change yourself. Yet the latter is the only sane option we have. We need radical political change, no doubt about it, but first we need to acknowledge that each one of us plays an important role in this game. After all, Polititians and the Rich aren't aliens – they are people like you and me. If we keep being selfish and aggressive and corrupt, they will do the same. For THEY are US.

I dread to think what will happen when we are faced with a more serious problem than a little virus. When the climate goes crazy – iceage or heatwaves, take your pick – and there will be millions, not thousands, of people trying to survive by heading North. Are we going to let them drown and starve (as we do already), or perhaps shoot them right away?

Possibly the favourite three letters of the conspiracy community are NWO – New World Order. It's said that there's a big globalist agenda going on with the aim of establishing a totalitarian world government. Personally I actually think we need some kind of global authority, given that individual states aren't capable of tackling challenges such as the climate crisis and the ethics around artificial intelligence. But before we get lost in an endless discussion, here's a simple suggestion for a new world order: change the way you look at the map! Because as long as we continue to regard US at the top and THEM at the bottom, global peace and happiness ain't gonna happen. For this is the real elite terrorist attack, our perspective! 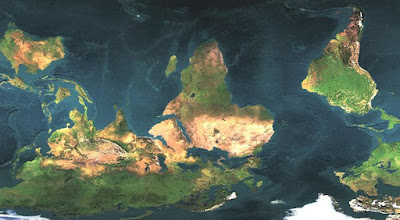