The other day on Tinder I...
“What? You're on Tinder?”
Yes, I'm on Tinder. Sometimes. Why not?
“Because it's so superficial. I didn't expect that of you...”
Well, what can I say? Most Singles I know are on there. I guess I'm trying to be normal. Kind of. And hey, while Tinder has a reputation for being a dating app that is merely used to find quick sex, ultimately it's like with everything else in life: It all depends on your intention and your attitude! One-night stands are indeed a possibility, but so are new friendships, beautiful romances and even the future husband or wife – as always, limitations reside only in the mind.

Now, admittedly it's a rather superficial act to select potential lovers from looking briefly at a few photos but...c'mon, if you go to a bar, what makes you talk to someone? It's not that people wear signs on their foreheads naming their favourite books. Either there's some physical attraction or you stay alone and order another beer. And I hate hanging out in bars anyway.
Of course Tinder can't match up with an experience like walking into a groovy vegan restaurant in Berlin, high on Californian weed, and bumping into someone you didn't even know was waiting for you... But hey, how often does that happen?

Used in moderation, a dating app can be really entertaining because apart from some pretty faces you also see all sorts of really weird and crazy people. It's like a freak show, right on your phone screen! You get a glimpse of how strange society really is – scary stuff, but also very funny...
So the other day on Tinder I saw the profile of a woman with the following line as her intro text: 'You've got the Rolex – I've got the time.' At first I couldn't stop laughing. What a ridiculously dumb thing to say! Honest perhaps, but nevertheless stupid. Then I was amazed that this kind of old-school thinking still exists. I mean, it's the 21st century, right? Each to their own, sure, but you'd think that we've come a little further than this by now. Maybe not. Anyway, somehow the words stayed in my head and I started thinking about what else they might have to say.

Quite often we find ourselves in situations where, in one way or another, we have to choose between time and money. Should I go out to eat, which costs more money, or stay in and cook, which requires more time? Should I take the taxi or the bus, car or bicycle? Should I book a luxurious hotel for a week or go backpacking for a couple of months? Do I move to a bigger flat so that I have more space for all the stuff that I buy, knowing that I will have to work more hours to pay for it all? Or do I change from a full-time to a part-time job, gaining free time but losing money?

In short: Do I want to be the one with the Rolex or the one having time? I think it's a very important question to ask oneself, at least once in a while. If you prefer the Rolex, that's cool, but unless you're already super rich there's a little detail that might be worth considering. Here it is: You can spend your time without spending money, but you can't spend money without spending your time. Every cent has a timetag on it! Therefore I think it's a good idea to try and choose wisely how much money you really need – and how much time you want.

Some Dude from Uruguay sums it up perfectly. (And just in this moment I'm realizing that I've somehow ended up creating a link between the bizarre world of Tinder and the great José Mujica. I hope he forgives me...)

“When I buy something, or when you buy it, we're not paying with money. We're paying with the time from our lives we had to spend to earn that money. The difference is that you can't buy life.” 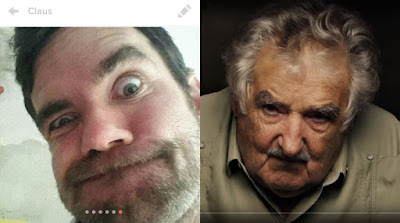 (extract from HUMANS with the above quote from José Mujica)