Do you need what you keep?

His name is Carlos. He's a juicer. And not just any juicer – he's a legend! Made by a small manufacturer in California, he's also known as THE CHAMPION. I've bought him about 10 years ago and witnessed his magic on several festivals where I was running juice bars, and at home he's been a great help to supply my daughter with vitamins in a hassle-free way. Fruit juices, vegetable juices, sorbets – all amazingly delicious! 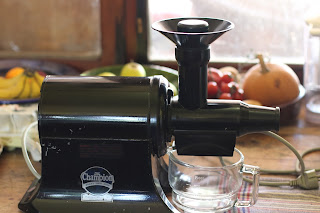 A few weeks ago I saw Carlos when I was cleaning the kitchen. Tucked away on the top shelve, he was collecting dust and didn't seem too happy. It had been at least 18 months since we made juice together and I don't think my house mates had used him during this time either. So there he was, a precious gem, half forgotten and totally unappreciated.
I started wondering: Do I actually need to keep him? Maybe someone else would be delighted to use him? I could sell him and make some space. But then doubts came rolling in. What if I'd regret it? Maybe I'd miss Carlos. What if I want to use him next week, or next month, or next year? What if I never recovered from the loss and would die of a broken heart?

In the end I sold Carlos to a good friend and now he's making my friend and his family happy. I earned some money, gained some storage space and, most importantly, I got rid of the feeling of having unused stuff cluttering my life. It was a surprisingly difficult process at first, to part from him, but once it was done it felt profoundly liberating.

In our civilised and wealthy world the endless accumulation of material possessions has become a very common problem. Sure, many things bring comfort into our lives but our greed and the lacking practice of letting go mean that more and more often we find ourselves drowning in stuff. It's like attaching weights to the wings of a bird – instead of travelling light we're getting stuck.

I used to live in a 4-bed room house. Empty corners were pretty much non-existent... When I moved to a small room in a shared house I put most of the stuff that filled the big house in storage. Bar very few exceptions, I didn't need or miss any of it once it was out of sight. It took me several years to finally get rid of it all. Now I don't even remember what it was.

Another good example are clothes. There are so many clothes in each home! But how many shoes and shirts do we actually wear? And if we don't wear them, why do we keep them? To remedy the nuisance of having an overcrowded wardrobe some people buy bigger wardrobes every few years. In contrast to this rather bizarre strategy, here's what a friend of mine does: Every spring she takes every piece of clothing that she owns and thinks about how often she has worn it during the past twelve months. Everything that hasn't been used for a whole year she gives away.

Ultimately it's quite easy. Just go through all your stuff and ask yourself: Do I really really really need it? If not, there are flea markets and auction houses and many people who have hardly anything and would gladly help to lighten your load. Freedom and happiness are waiting! It's not YOUR stuff anyway. It's just stuff.

For further inspiration and perhaps a final push, listen to the wise words of Mr Flowin Immo: 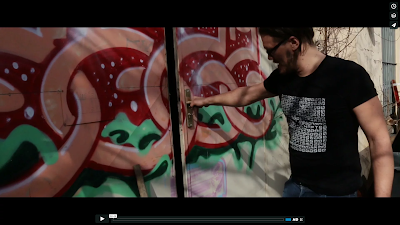