Midday, 36° C in the shade, 10 floors up – 'no way!', I thought while looking at the stairs. A few seconds later I was standing in the elevator of the big apartment block where I had to meet someone. The elevator had a mirror, like most elevators do, and it also had a little flatscreen on the wall. Immediately my eyes were hypnotized by the flickering lights. Headline news about the latest terrorist attack were shown, with a Muslim as the first suspect (obviously), and on the bottom of the screen a banner with local advertisements running along at high speed. In that moment I imagined what it must be like to get up every morning, head to work and the first thing you see, every day, is how shit the world is. Just what the doctor ordered, ay? Mind you, by the time they are in the elevator many people will have seen the same depressing stuff already once on their phones while still in bed and another time during breakfast on TV. Essential stuff for another bright new gloomy day!

About three years ago I spent ten days in silence during a Vipassana meditation course (more here). When I 'got out' after the course, after ten days without phone, internet, books, music or any other form of distraction, I was wondering, 'who knows, anything could have happened while I was away'. Earthquake, death, political unrest, new world record in 100m sprint – I wouldn't have heard about anything! And you know, it didn't matter. Because, if we're honest, almost everything we hear and see on the news has no relevance to the lives that we live. It has nothing to do with our own daily challenges, joys and dreams.

Personally I think a short ride in an elevator offers a nice little opportunity to reflect for a moment, to look at oneself in the mirror and pause for a few breaths. If the news on the screen were at least predominantly inspiring and encouraging, I'd be fine with that too. But watching only terror and incompetent politicians and super summer sales announcements, that's just the worst possible way to spend a moment of solitude. And isn't that a real tragedy? All these precious moments of solitude, we let them slowly slip through our hands...

What to do? Well, if you're unfortunate enough to live on the 10th floor with one of those brainwashing units in your elevator and you don't want to be brainwashed, you basically have three options: either you take the stairs, or you close your eyes while in the elevator, or you dismantle the damn screen and take it to a charity shop.

Fact is, most news stories make us angry, scared or depressed, or a combination of the three. Even worse, many of the stories we choose to tell do the same. And in a hyper-connected world of soon eight billion, everything we say and do is sending out a message. In a way we are all screens, transmitting information constantly. So the question is, what kind of information do you want to spread? 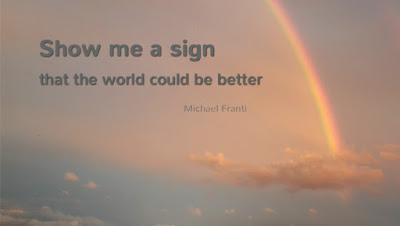