The one trillion tax talk

Would you like to pay less tax? Less income tax on your earnings, less VAT on your purchases? Having 30% more money at the beginning of the month and paying 20% less on all things that can be bought? Sure you would – who wouldn't?

Unless your tax consultant is a genius though, or unless you're willing to fight a fierce David vs Goliath battle with the tax office, you won't be enjoying the benefits of less or no taxes. Or unless you are a powerful corporation.

I don't know about you, but I pay almost always the full tax. I don't mind doing it – I put something into the big pot and then the government takes money from this pot to finance hospitals, schools and roads, plus giving the really poor a helping hand. A good and sensible invention, this tax thing. Of course the government also does a lot of stupid things with that money, like subsidizing already profitable or even harmful businesses, fighting wars, building walls and so on. Enough material for 50 years of blogging, but let's ignore it this time.

A recent study estimates that 1,000,000,000,000 (one trillion) Euros are lost each year in the EU from both tax avoidance and tax evasion. Even if the estimate was bad and it came to only half of that, there'd be still 500 billion Euros lost each year. In other words, if everyone – individual people and corporations – paid the tax that corresponds to them, the EU would basically have no more financial problems. All public debt would be paid off within nine years and absolutely everyone would have their basic needs covered, such as education, healthcare, food and a home. No higher taxes needed – just pay your fair share. And yes, Amazon, you too!

“Tax law should be enforced and all should be required to pay what is owed by them. If that is not done actual inequality arises: those who pay their taxes are worse off than those who do not. Resentment builds amongst taxpayers and non-compliance increases. More worryingly still, honest business is undermined by dishonest business. This means that honest businesses are more likely to fail.” (source)

So why is there such a huge tax gap? There are many reasons, but the underlying cause is probably human greed. Greed for money and greed for power. Just as a poor woman might steal a pen when she gets the opportunity, a middle class woman saves cash when paying a cleaner in black and a rich woman steals two million from the tax pot. In the same way, a corporation, guided by its shareholders, also grabs the opportunity for extra profit when it arises.

I don't like greed, but I can accept it. It's an ancient human weakness – wanting more, always more. However, given that the facts are so clear, that it's greed leading to tax theft leading to reduced public funds, there are other things that I can't accept. Like blaming immigrants for example.

The whole tax gap disaster needs to be solved, the sooner the better. That's where most attention should go. Instead, people go crazy when we open the borders to help those we've exploited in the first place; they say we can't afford more immigrants, so why should we rescue those sinking boats? Europe first – those black folks just want to steal our money.

Greed is causing inequality. Hence greed needs to be faced, addressed and, if not eliminated, at least it has to be tamed and controlled. Racing against immigrants is not only a sad human tragedy, but it's simply the wrong strategy. It will only worsen the problem, it will divide and breed hate and it definitely won't generate 1 trillion Euros... 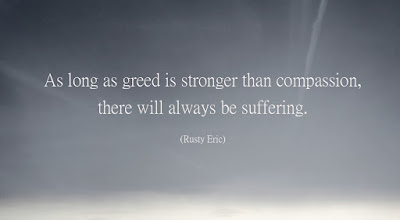 And just because it fits so beautifully, here's Donald Trump:
“The point is that you can't be too greedy.”
Any questions?