Jesus was a Buddhist

Today, almost 2000 years ago, Jesus died on the cross. He was buried and two days later he came back from the dead, sent by God. Known as the resurrection, it's an event that is the foundation of the Christian faith. But was he really sent by God? And did he actually die?

There is a period in Jesus' life which is called The lost years, or, more poetically, The silent years. From the age of 12 to 29, there's a gap in his timeline, It's an accepted fact – 'modern mainstream Christian scholarship holds that nothing is known about this time period in the life of Jesus' (source). There are all sorts of theories about these missing years, the most common ones saying that he had worked as a carpenter in Galilee or that he had studied in the desert. But there's another one which sounds at least equally plausible – including a fascinating twist of the known resurrection story! Here it goes:

To 'improve and perfect himself in the divine understanding', Jesus went to India. He studied with Brahmin priests in Odisha and later travelled to the Himalayas where he spent many years in monasteries, learning about Buddhism. There is an interesting documentary from the BBC about this, where historians say that, in those times, it was a fairly simple journey from the Middle East to India. I also read somewhere that Jesus was seen as crazy in his teens, and well, if people think you're crazy, what better place to go to than India?
With 29 years, he had learned enough and returned to his homeland in Galilee.

I've spent quite some time in India in my early twenties – I know what it can do to a young man. It certainly can make you even more crazy! But it can also initiate a spiritual revolution within, it can take you to beautiful deep places that basically change the way you look at life. And yes, there's Buddhism too.

To me this theory makes absolute sense. A young, curious guy goes to India, spends many years learning and practising Buddhism, and then he comes back with a bright smile and teaches what he's learned. People are first intrigued, then fascinated and finally they follow him around, because they want to be like him: happy.

Now, monks who are very experienced with meditation are able to alter their body temperature and also to lower their heart rate significantly, resulting in an almost absent pulse and no heart sounds. So what if Jesus, the Buddhist hanging on the cross, had applied the breathing and meditation techniques he had learned in the Himalayas? He would have been declared dead (no one could have double-checked with an EEG back then), put in a tomb and everyone would have thought he's dead. Two days later he climbs out and is the hero. Not that he cared to be the hero (true Buddhists seldom do), but it was perhaps the only way to escape death at the cross. Can't blame him for this little trick, can you?

If you strip the teachings of Jesus of all the religious add-ons, at the core of it all he talked about pretty much the same stuff as Buddha. Love, compassion, peace. Therefore it's totally possible that Jesus was actually a Buddhist, inspired by Buddha, sharing love and wisdom with his fellow people. That he wasn't the son of God, but instead a soul-searching Dude who got into meditation. Could have been you or me...

So why does this matter? After all, it's just another story. Yet that's exactly why it matters. They're all stories. Nobody can travel back in time and find out for sure.

We need stories. They inspire us, comfort us, give us hope and help us to connect with each other. But the importance of a story isn't the historical setting, it's not the details of events and characters and it doesn't even matter whether any of it has actually happened. All these things are irrelevant. What's important is the message. 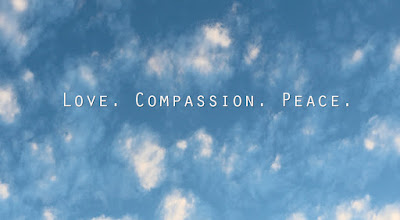