The way things are going, it's quite unlikely that the human species, or any species for that matter, will survive. If you consider the continuous growth of consumption and environmental destruction, I don't think anyone will be here in one thousand years. And chances are good that we won't even last another hundred.

But if we do survive, what is it going to look like? Will it be much fun to continue with all the wars and abuse and the hateful existence? Living between dirty rivers and hostile walls?

Huge environmental disasters will trigger the establishment of a global council of the wise. Like the UN, just without corruption and with real power when it comes to pollution of the land, the water and the air. And yes, all those passionate conspiracy theorists out there, if you want you can also call it a New World Order, I don't mind. Something NEW is definitely needed. Actually, the choice we now face is between something completely new or something completely dead. In this little Utopia, we chose the new.

With environmental protection being the number one priority, the selfish interests of countries will lose importance. That doesn't mean that culture will become unimportant too – culture is beautiful and hence it should be treated accordingly. But most countries are too big to really represent culture. Go to Andalusia and then to Galicia – same country, but culturally they're worlds apart.

So in my little Utopia, small regions are celebrated and respected, while at the same time a global nature government protects the interests of planet Earth. Also, culture will be seen as what it really is: A living organism which is evolving like all other living organisms. People – all people! – can roam the world freely and are welcomed with curiosity, rather than rejected out of fear. No one will ask a differently looking person for his or her migration background, but for his or her migration foreground – because migration is nothing to be ashamed of, nothing that should be hidden away; after all, it's what makes life colourful!

There will be more cooperation and less competition, plenty of Fusion festivals and no fascist marches, clean rivers and friendly border patrols. And who knows, perhaps, if people start to heal the hate within, there will be even peace... 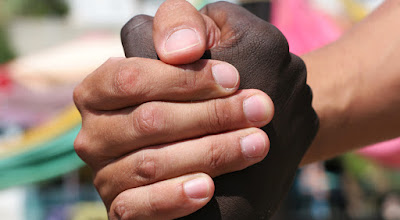 I know, just a silly Utopia by a guy who had a tiny moment of hope. But hey, what would we do without Utopia? Surrender to misery?

Utopia is on the horizon. I move two steps closer; it moves two steps further away.
I walk another ten steps and then horizon runs ten steps away.
As much as I may walk, I'll never reach it. So what's the point of Utopia?
The point is this: to keep walking.