I love this world

It's a bizarre place we're living in, the world of humans. And it's seriously fucked up, too. There are many examples, but recently I stumbled across something which beautifully illustrates the level of madness we've reached. It's rather comical, at least the beginning of it.

Basically, a bunch of weirdos come together once in a while, get served a certain type of food and whoever eats most in a set time, wins. Thousands of dollars of price money are handed out and millions watch the battle on TV. Here are some of the records of recent years:

If you want more examples, just check out the MLE records. And if you haven't vomited already, here's a yummy video of the 74 hot dogs record.

Does anyone still think we've evolved since Roman times? The clothes are different and there are cameras today, but otherwise it's the same sickening feast as two thousand years ago. Probably even worse.

Now, in a fair and just world, it wouldn't really be a problem. If everybody had enough food, we could laugh at twenty people behaving like pigs. The thing is though, the world is far from being fair and just. Yes, we've made some impressive technological progress, but beyond that, the human race is as stupid as ever. And as ignorant.

Just step out of your own daily drama for a moment and look at that last number again. Over 18 million human beings have starved to death this year, while in a different part on the same planet, in the so-called civilized world, people are heroes because they eat 74 hot dogs in 10 minutes. I mean, if you met a friendly alien and he or she asked you about it, what would you say? Didn't know? Didn't care? Shit happens? 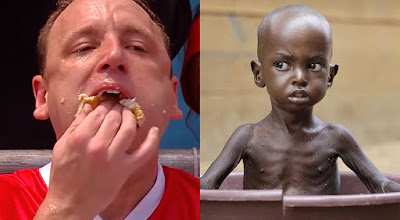 Of course it's neither your fault nor mine. Or is it? True, neither of us has eaten five kilos of frozen yogurt. We'd probably be dead. And neither of us has let a fellow human starve to death in front of our doorstep. But fact is, in a world which has enough food for everyone, every second a person dies of hunger. This is just sick. And in one way or another, we help to keep this sick system going. Through ignorance, through greed, through selfishness. It's really really sad and heartbreaking, it makes me angry and disillusioned and I wonder whether we actually deserve to live. So much unnecessary suffering and so many people who don't give a shit. Hope? Almost gone.

And yet, strange as it may sound, despite all cruelty and stupidity, I still love this world. It's beautiful and special and I'm happy to be here. Each and every moment, somewhere on this globe, people help each other, care for another and love each other. Someone is planting a tree right now, believing in a fruitful future; some are sharing food, others are changing their selfish attitude. It's not always easy to see, but loving action, coming straight from the heart, is practised by millions all the time. And as long as there's love, it ain't over yet. For love can make it better.