Between hopelessness and hope

A few million activists demonstrated for more climate action last week; the vast majority of scientists agree that, while the climate is changing naturally, human action accelerates this change, making it much more difficult, perhaps even impossible for us to adapt to the new living conditions. And no, the Earth doesn't care about a few degrees more or less – it's all about us (and thousands of other species, but hey, let's ignore these for now, otherwise it will get too depressing).

Facts are clear, consciousness is rising. But there are still far too many who think this is all exaggerated, or that it's some kind of master plan of the evil elite. The climate is fine, we are fine, let's just keep going and burn everything to the ground. Worst of all, our governments seem to think in similar ways. How else can you explain their complete failure of adequate action? In England they are busy with Brexit, in Spain they'll soon have the fourth general election in four years, and in Germany the coalition government just announced a new climate deal which is, quite frankly, a joke.

So what to do? Surrendering? Trying to be happy as long as possible, choosing some nice drugs and closing the eyes? It's definitely a possibility. But as a friend pointed out recently, if you give up on hope, what's the point in living?

But if we don't want to surrender, then what? Is it enough to change the plastic bag for a cotton one? To like a few posts on Facebook and get angry about the status quo? Surely not. As George Monbiot said in a short but very appropriate statement, we have to “stop pissing around at the margins of the problem”.

At this point, everyone who doesn't want to change usually blames China and India. "If they don't do anything, why should I bother?" This is one of the most ridiculous arguments ever! I think it's fairly obvious that the 'West' was the first to benefit greatly from resource exploitation and the consumerist growth madness which has become the new religion. If we were the ones who set the bad example, we should be the ones who now set a good example.

Who knows, we might be screwed already, but if you are not ready to give up hope just yet, here are three things which are said to really make a difference: 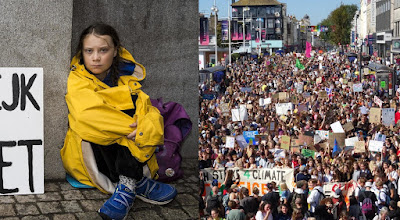 And no, it's not all about the climate. It's about nature, our home. Most actions which slow down climate change also reduce the destruction and pollution of this planet. In other words, even if you don't believe in human-induced climate change – do you really want to live in a shithole?