Netflix, Youtube, Instagram – never before has there been so much competition for books. Not surprisingly, the number of readers is constantly falling. 6 million less since 2012, just in Germany! So to be in the book business in the year 2019, you have to be either very courageous or very stupid.

Courage is knowing it might hurt, but doing it anyway.
Stupidity is the same.
And that's why life is hard.
(Jeremy Goldberg)

In 2005, I decided to write a book. For no other reason but wanting to write a book. Why not? I finished it, and it was pretty crap. The following year I wrote another one, didn't finish it. Then, in 2007, I wrote another one. I liked it and decided to publish it, despite being called a stupid time-waster. I don't know if it was a courageous act, but at least to me, it didn't seem stupid. I just did it anyway, why not?


Today, this book (including its three sequels) has sold over 200,000 copies and has been published in six countries. The book is called THE LITTLE BUDDHA. Not about the Buddha, nor about Buddhism, it tells stories about life, viewed through the eyes of a young traveller. In Germany and Austria, it's been a bestseller for the last six years, there are editions in India and Korea, and Russia is knocking on the door too. Furthermore, the first two parts were just released in the UK by Ammonite press, with amazing new illustrations by Kate Chesterton. 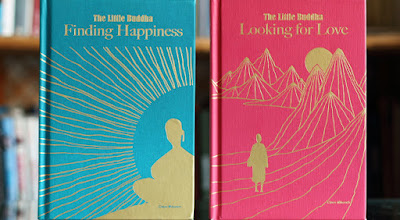 Looking at the current success, two things are easily overlooked. 1) I didn't just jump from 'stupid-guy-trying-to-write-a-book' to 'global-bestselling-author'. It was a difficult journey. And it still is. 2) Just because I wrote a bestseller, doesn't mean I can relax and drink champagne all day. With each new book, I still have to work hard and hope to find a merciful publisher. And not only that. If you buy one of my books for ten Euros, I get about fifty cents on average. Industry standard. I feel very privileged and grateful that I can make a living as a writer, but if you think I'm rich, well, do your own maths.

'Money is not everything' – a ridiculously simplified and totally overused phrase! And yet, there's a lot of truth in it. But this truth is so simple that we often fail to give it its deserved attention. Like many of those simple truths. Living in the moment, accepting change, sharing love.

One of my favourite reviews of The Little Buddha came from a good friend of mine. His summary: “It's basically spirituality for dummies.” It was a very honest and authentic comment, and it is true. The only question is, who isn't a dummy? Because really, we are all dumb sometimes. Thinking stupid things, doing stupid things and making the same stupid mistakes again and again. We often assume we know all life wisdom, but we don't. Or least we don't apply it.

Over the years, I received lots of messages from readers. Many told me that the books helped them during hard times; depressions were lifted, families healed and souls inspired. Some found new meaning in life, others were happy to find old answers. All of these messages mean a lot to me, because they are proof that the payment for my work doesn't only consist of money. Apart from hard cash, I'm also being paid with gratitude, love and the priceless feeling of making a difference.

The Little Buddha has become a really good friend. Every two years or so, I sit down with him, decide on a trip and set off. We travel to mountains and deserts, past rivers and through woods; we meet people on our way, beautiful ones and strange ones, like the generous chef, the blind witch or the crazy clairvoyant. We ask questions and sometimes we find answers. The first journey was all about FINDING HAPPINESS, then we were LOOKING FOR LOVE and learned about EMBRACING CHANGE. This year we were EXPLORING TIME, and the next trip will take us to...we'll see.

The first part of The Little Buddha is dedicated to friendship. I wrote it for my friends, not knowing at the time that the act of writing would create a new friend. A very special friend who keeps reminding me of the little life treasures that I keep forgetting. Someone who shows me with kind and simple words how vast my stupidity is, each time I don't learn my lesson, or each time I treat the beautiful gift of existence like an annoying ordeal. Life ain't that difficult. We make it difficult.