Blessed be the climate crisis

Do you ever get tired of the human drama? I do. All the conflicts over resources, over money, borders and power. A never-ending soap opera, sadistic and silly, loud and utterly unnecessary. It can be frustrating and depressing to watch, sometimes it makes me angry, other times sad and only very rarely it makes me laugh. Probably the only thing I should do more of. Laughing. A comedy, disguised as tragedy.

Here we are, floating in space on a beautiful planet. We have enough land to feed everyone, enough shelter to protect everyone, and enough talent to entertain everyone. But do we have enough love to care for everyone?

According to historians, we live in the most peaceful times ever. While this may be true, it's kind of irrelevant. Just because we went from 'extremely violent' to 'very violent', does that justify the status quo? No. it doesn't. The global ecosystem is sick. People, plants and the planet are suffering, from illness and madness. And it seems to be getting worse.

Wherever you look, people are divided. It's left against right, rich against poor, white against black. Like in sports, an endless competition. Barcelona vs Madrid, Tories vs Labour, Christianity vs Islam, Europe vs Africa. We're all different, yes, and some want to compete, fine. That's why there's football. Watch a game, raise your flag and enjoy the fight, great! But if children are starving, it's not a game anymore. If people don't feel safe because of their skin colour, their god or their passport, it's not a competition anymore. It's an attack on humanity!

So let's play God for a moment. You look down on your creation and see the messy state of the world, bursting with selfishness, ignorance and destruction. What would you do? Perhaps something which forces all humans to come together. They won't do it voluntarily, so there needs to be certain pressure to get them into action. A threat. An emergency. Something to shake them up.

Something like crazy weather for example. Caused by their own reckless consumption. The whole climate out of control, with floods and droughts, hurricanes and heat waves, rising sea levels and hundreds of millions of migrants. It will be all or nothing – genocide and extinction, or peace and love.

Maybe it's our only chance to become truly human. One species, friendly, kind and generous, celebrating the gift we were given. Cooperation instead of competition, helping hands and no division, a utopian paradise.

I'm tired of dreaming. If it's really our only chance, then blessed be the climate crisis. 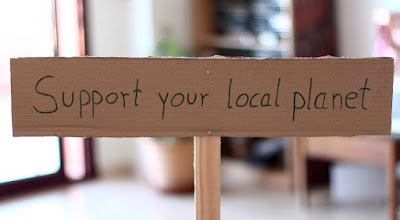