Have you noticed that most climate change deniers are from the right political spectrum? And how is it that musicians, writers and filmmakers, are usually from the left? I have no idea about the artist’s conundrum, but I've found a good explanation for the first observation.

It isn't a coincidence that scepticism about climate change tends to be the preserve of the nationalist right. You rarely see left-wing socialists tweet that climate change is a Chinese hoax. When there is no national answer, but only a global answer to the problem of global warming, some nationalist politicians prefer to believe the problem doesn't exist. (Yuval Noah Harari)

I'm not really a patriotic person myself, never have been, don't know why. I don't mind if others are – as long as a little bit of patriotism doesn't turn into full blown nationalism, with made-up countries becoming more important than everybody's planet.

I also find it quite annoying and sad when people become so obsessed with their national identity they end up insulting everyone who threatens their view of the world. Everything should stay as it is: borders, religion, language, food and cheap flights. Ironically, those who stand behind conservative values are the ones who keep attacking a sixteen-year old girl from Sweden because she's fighting for the conservation of the Earth.

Greta Thunberg is one day younger than my own daughter. When I read some of the comments about her, the jokes about her illness, the mockery about her angry face, the hateful rants – honestly, I'm lost for words. A teenager who cares for the world and all living beings, who understands that we're destroying our home – I mean, how fucked-up must you be to ridicule her? Manipulated by the Elite? We are all manipulated by the Elite, every day! What matters is that there's someone who loves life enough to defend it.

I was recently at the COP25, the climate summit in Madrid. There were over 500,000 people marching during the main demonstration – many of them were there because, only one year ago, Greta decided to do something about the climate emergency. One fifteen-year-old girl with a sign. If you can't see the beauty and the power in this story, and the hope within, then try harder. Because it's all there.

I walked amongst friends and those 500,000 people, and one day later we joined Extinction Rebellion who had blocked the Gran Vía, one of the main shopping streets in Madrid, in an act of disco disobedience. Combining climate action with a celebration of life. 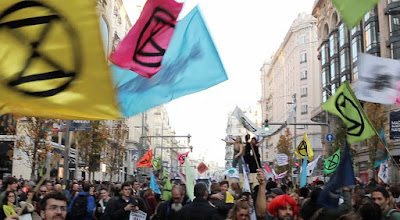 I always promote and work on personal change – keeping money in an ethical bank, buying more local and organic products, less meat, less flights, etc. And while this is super important, political activism is needed too. If we don't demand change, hardly anything will happen. Hence, it's vital that more and more people join the different movements campaigning for climate justice. If not now – when? If not you – who?

The recent experience in Madrid has also shown me how much fun activism can be, how it connects you to others, making you feel less alone in all this mess we've created. Being surrounded by people who believe in solutions, who complain less and act more, has a deeply healing effect. To me, it felt like a big injection of hope!

Here's a video of our trip, including the demonstration and disco disobedience: 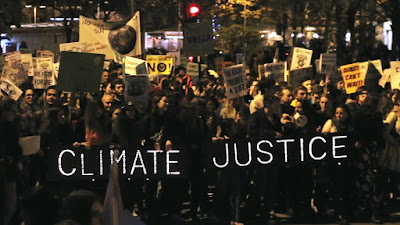